My PhD was focused on Habitat Cascades, an unidirectional sequence of positive interactions where a species provides habitat for another species, which in turn provide habitat for another species… and so on. Jointly with the direct interactions occurring (species A – species B, and species B – species C), indirect interactions are also involved (species A – species C). Habitat cascades are one of the different types  of facilitation, where the main benefit of the interaction is specifically habitat formation, modification, or amelioration.
In the picture, I show a typical example of habitat cascade object of my research, specifically as part of a project focused on rocky shore canopy-forming seaweeds: seaweeds naturally support a very varied and plentiful community of invertebrates of different taxa providing shelter, refuge from predation, stress buffering, resources, etc.; when a seaweed supports an epiphyte, providing additional settlement space, the chain increases its level and complexity and the invertebrates are additionally facilitated by the epiphyte.
As a result of these interactions, the total abundance and taxonomic richness of invertebrates it is supposed to be higher than the simple summa of abundances and taxonomic richness supported by each habitat former independently. 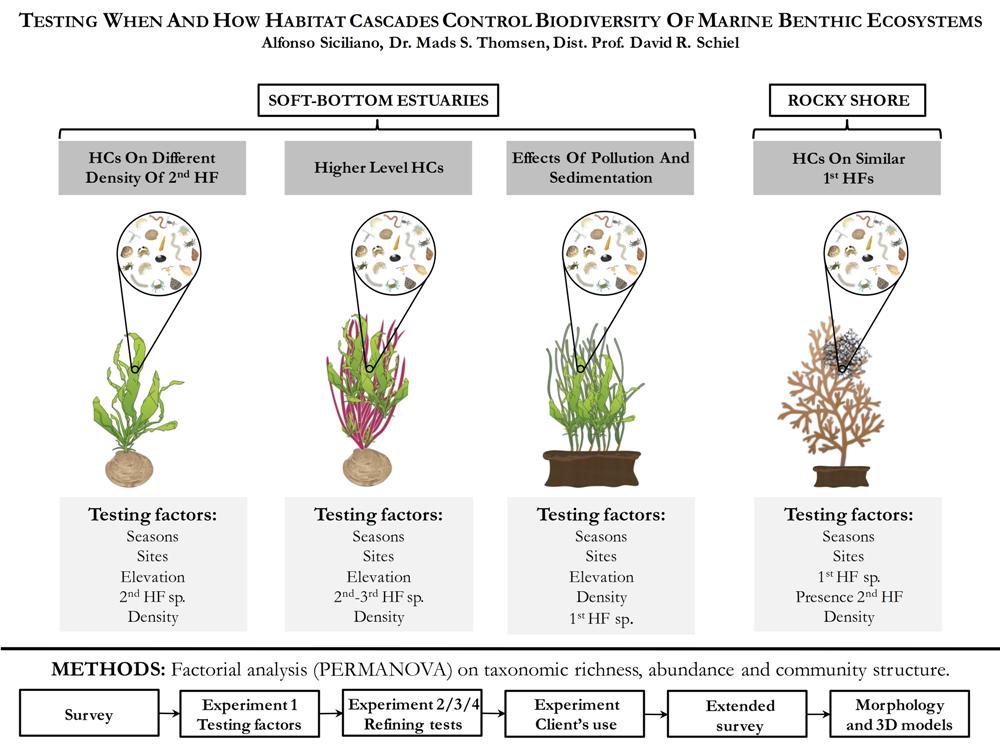 In my PhD I tested the core hypothesis that habitat cascades are key drivers in controlling and maintaining biodiversity in marine benthic ecosystems, in particular in those where epibiosis is prevalent.
I investigated, demonstrated and described the positive effects of these interactions in different habitats such as rocky shore canopy-forming seaweed-dominated systems, soft-bottom estuarines, and seagrasses beds.
The final aim of my PhD was creating realistic conceptual, descriptive and predictive ecological models that can be tested and adapted in several habitats, ecosystems and biogeographical regions. 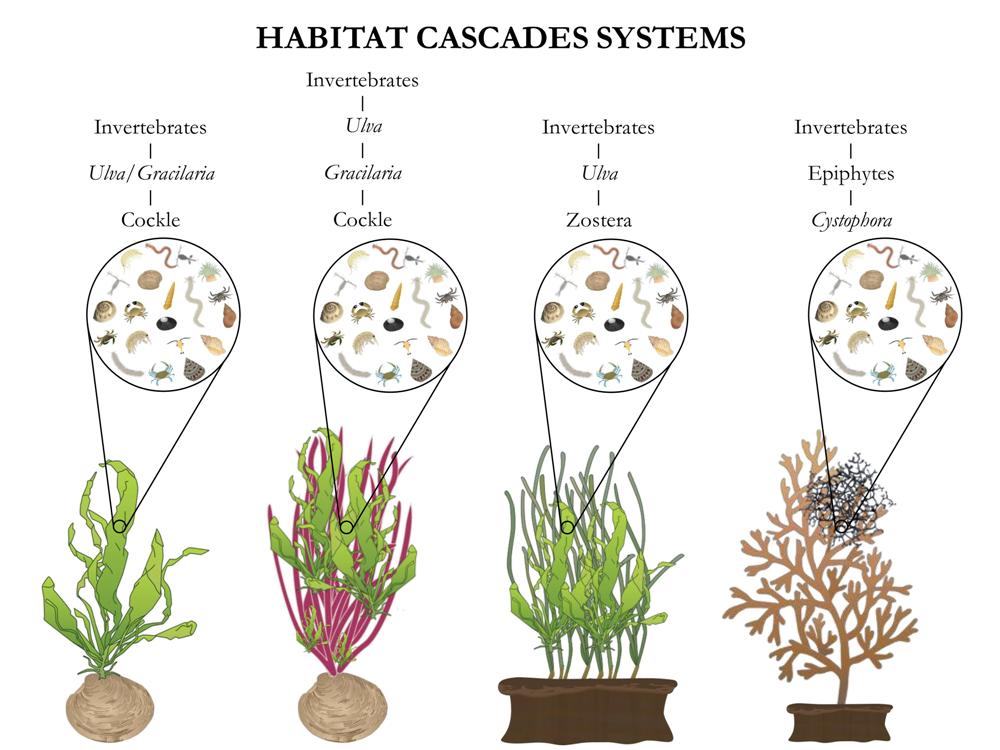 My PhD consisted of 6 projects investigating the role of habitat cascades in a perspective envisaging an increase in ecological complexity in terms of systems and species interactions, from simple low(er)-diversity soft-bottom estuaries (Projects 1-2) to seagrass (Projects 3-4) and high(er)-diversity rocky shores (Projects 5-6).

Each project consisted of:

– descriptive local and extensive spatio-temporal surveys: with deep focus on the effects of latitude and seasons, the surveys provided a general description of each habitat cascade system existing in each habitat and the factors affecting its strength;

– general manipulative experiments: specifically testing the habitat cascades with a multifactorial approach, involving multiple levels of different biological and structural features of the actors (such as biomass, alive vs artificial substrate, species, morphology);

– specialized manipulative experiments: testing the mechanisms behind the habitat cascades;

– morphological analysis: investigating a potential link between the structural complexity of each habitat former and the benefits able to provide. 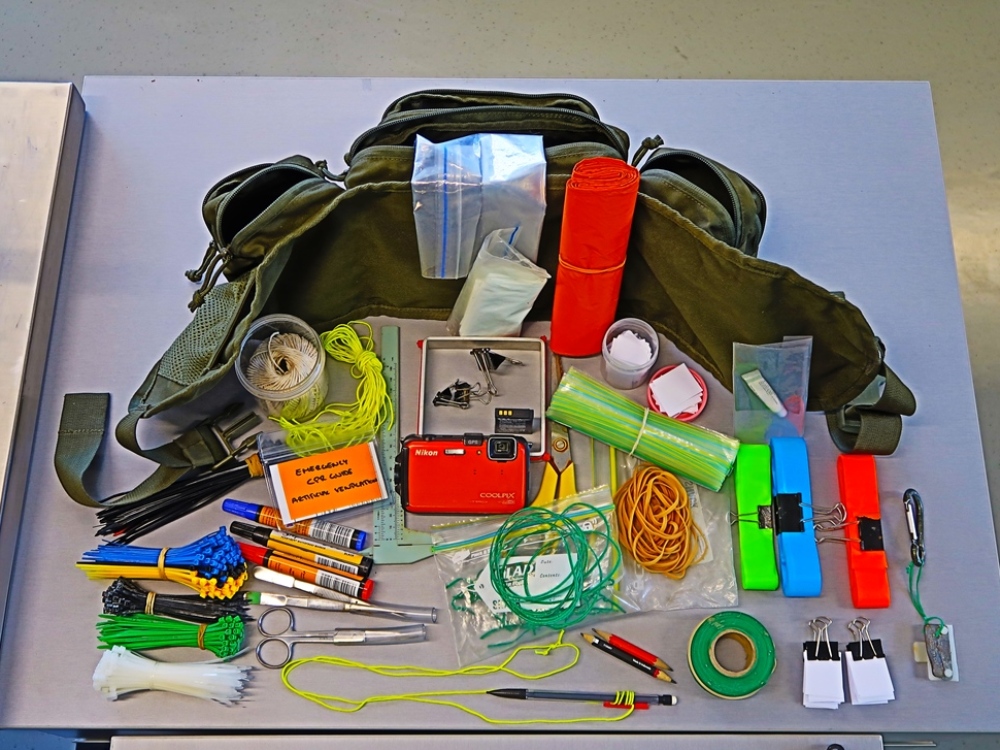 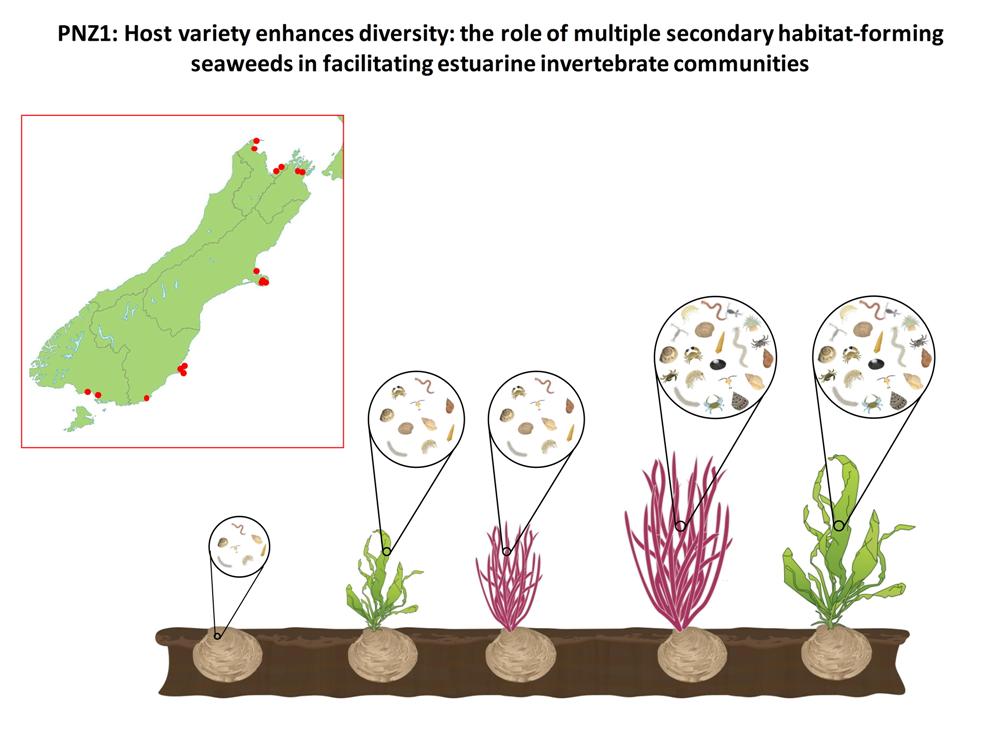 This project describes the simplest habitat cascade system documented during my PhD, in soft-bottom shells-bed estuaries. Here, my aim was to test if habitat cascades are strongly affected by the biomass of the secondary habitat formers and if different secondary habitat former species (i.e., ecologically and morphologically different) facilitate clients differently. Feature of this project was the strong ecological and morphological difference between the primary and the secondary habitat formers (respectively a bivalve and two species of seaweeds). This difference makes the seaweeds relevant in creating a strong habitat cascade, providing a large number of features absent in the primary habitat formers and providing, therefore, additional opportunities of facilitation (such as sheltering within the fronds, moisture retention in the soft tissues for intertidal stress buffering, disproportionate increase of settlement space, etc.). Then, I expected that seaweeds increase enormously the benefits provided by the cockles for the local invertebrate community and, therefore, that habitat cascades are of paramount importance in these habitats.

The aim of this study was to quantify the variability in habitat cascades supported by two ecologically and morphologically different secondary habitat formers, the sheet-forming green seaweed Ulva sp. and the coarsely-branched red seaweed Gracilaria chilensis. 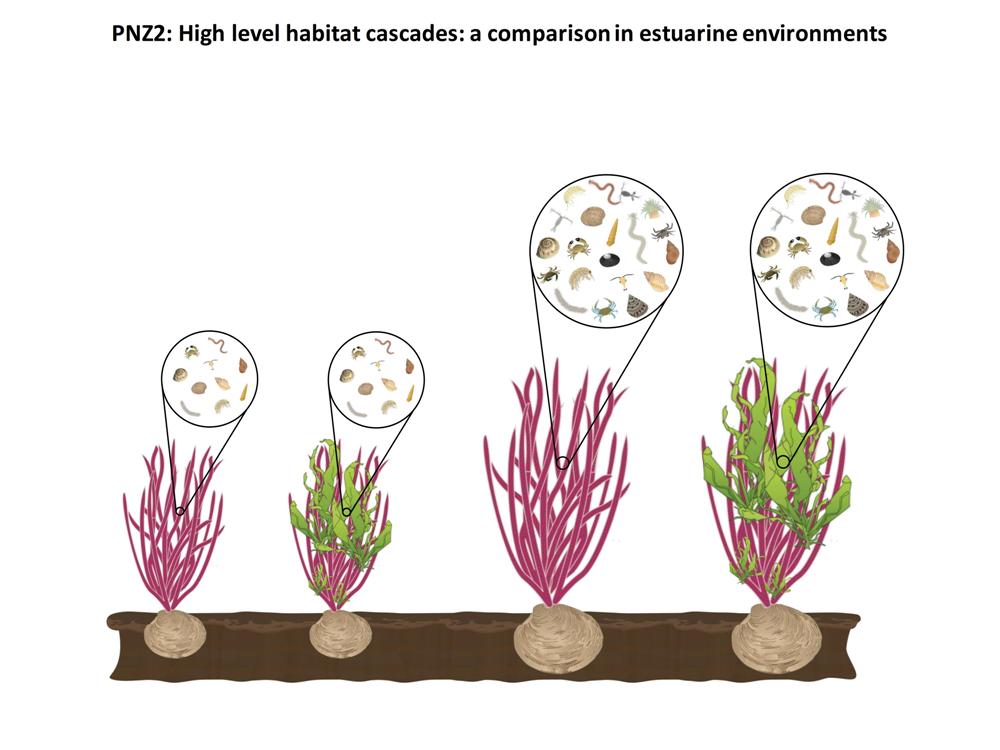 As complementary to the previous project, here I described a higher-level habitat cascade, again in soft-bottom estuarine communities, testing how a higher order habitat cascade affects client diversity. Here, the primary habitat former was again a bivalve while both the secondary and tertiary habitat formers were seaweeds but different in terms of species and morphology. To date, there are only two cases of ‘long habitat cascades’ described but I believe that they are common and widespread even if not enough investigated.

In this study I hypothesized the existence of a 4-level habitat cascade based on the successive interaction between the bivalve Austrovenus stutchburyi, the green seaweed Ulva sp. and the red seaweed Gracilaria chilensis. 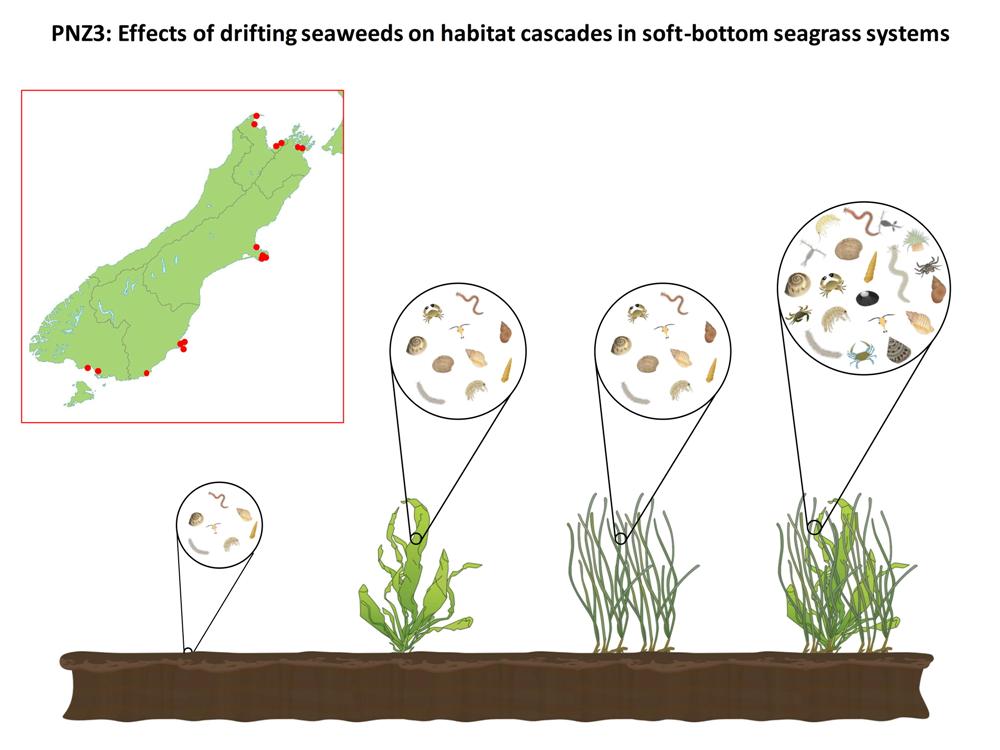 In this study, I described an habitat cascade based on the facilitation that the seagrass Zostera muelleri provides toward the drifting seaweeds entangled on its leaves. 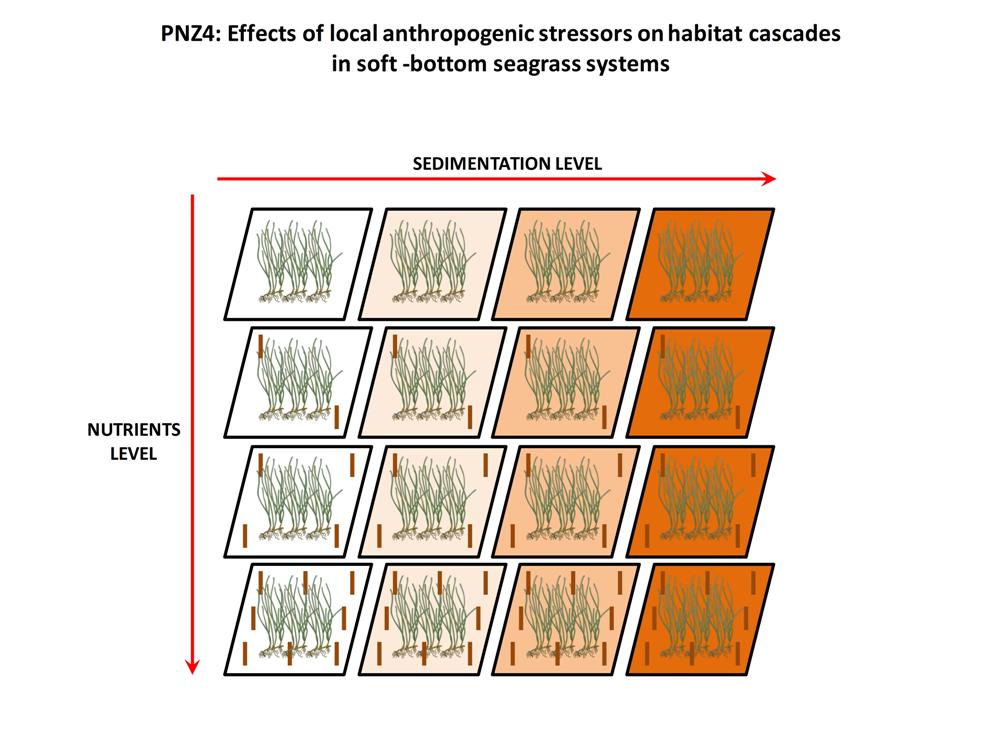 As complementary to the previous project, here I described how anthropogenic factors, such as nutrient enrichment and sediment pollution, can reduce the seagrass growing performances and how high rate of sedimentation can, consequently, destabilize the habitat cascades existing in seagrass systems.

Here, I investigated the effects of eutrophication and sedimentation on the Zostera muelleri performances and tested how sedimentation affects the habitat cascade based on the interaction seagrass – drifting seaweeds. 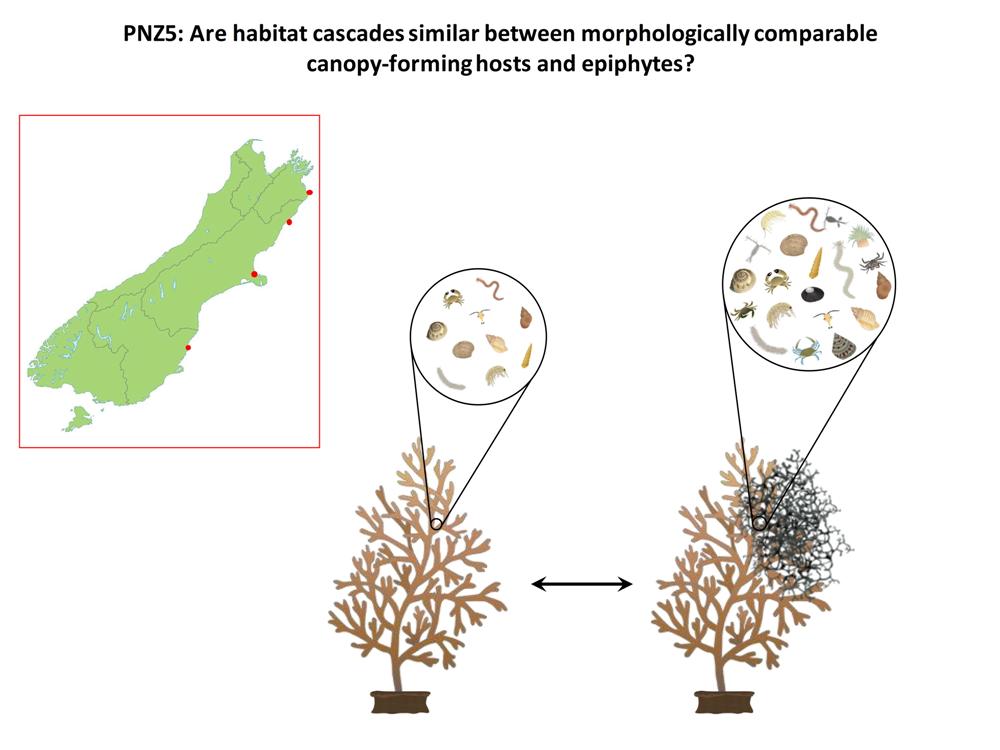 This study described a rocky shore habitat cascade, based on the interaction between the seaweeds Cystophora spp. and the epiphytes naturally supported. 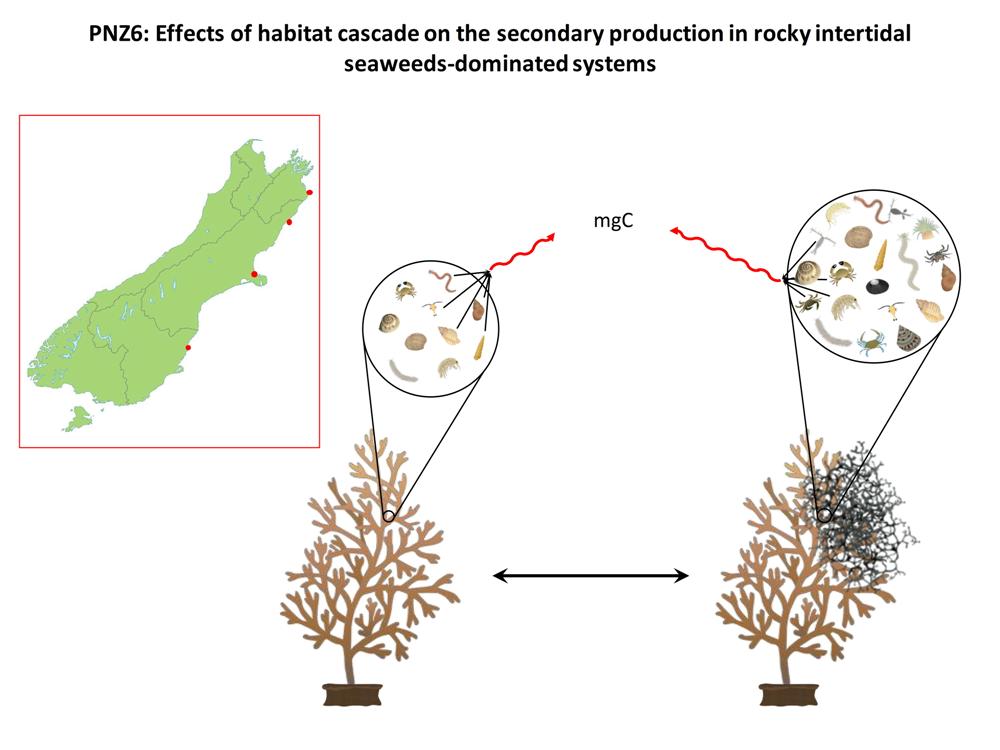 This project, finally, described how habitat cascades (the same described in the previous project) can affect the secondary production in rocky shore systems. Compared to all the previous projects, where classical community descriptors (such as abundance, richness and community structure) were considered, here I estimated the secondary production as function of epifaunal body biomass and water temperature using an allometric equation.

Here, I described a rocky shore habitat cascade, based on the interaction between the seaweeds Cystophora spp. and the epiphytes naturally supported, testing the effects on the secondary production.