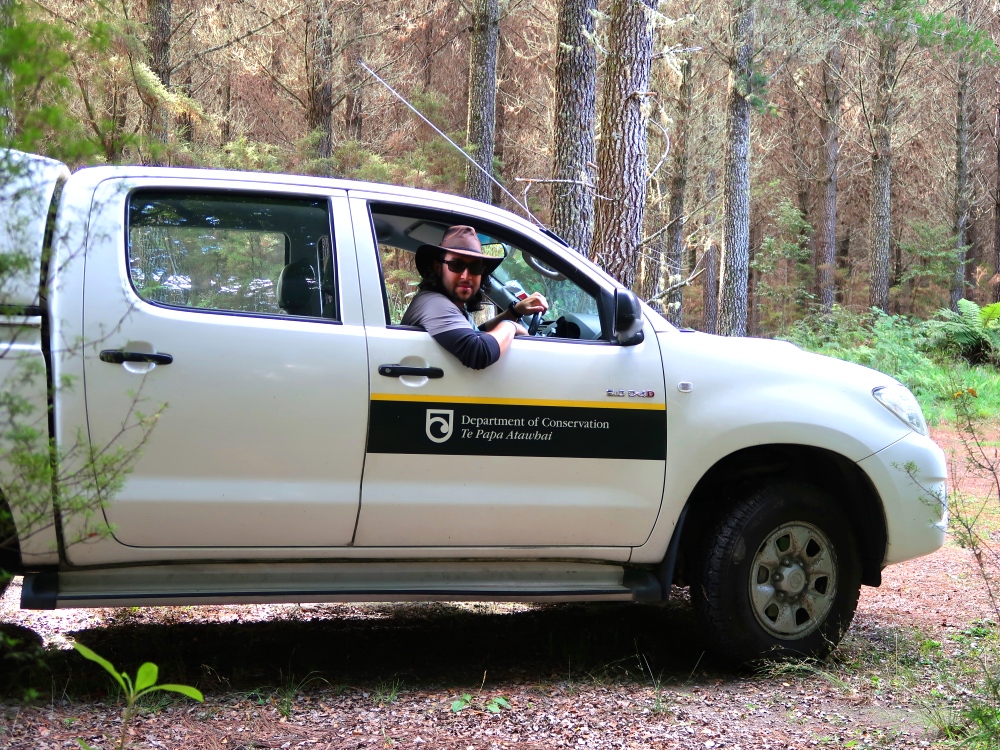 The Department of Conservation Taupo Fishery team is based in Turangi, trout fishing capital of the world, and manages, protects, and regulates the fishery at Lake Taupo, the Tongariro River, and in general in the Taupo District, some of the most popular destinations in the world for trout fishing. The Taupo Fishery mission is keeping trout fishing at the top of New Zealand’s attractions, providing some of the best experiences in the area of trout fishing.
The Taupo Fishery boasts a number of very strong collaborations with hatcheries (in particular the Tongariro National Trout Centre), hydroelectric power providers (such as Genesis, King Country Energy and Trust Power), Universities, city and regional councils, private consultancy companies, local Trusts, and more, leading and supporting a wide range of projects, from fishery management to environmental monitoring, from compliance law enforcement to education programmes.
The projects and programmes the team is involved in cover native and non-native species monitoring, drone surveys, project planning, coordination and support to the local fishery. 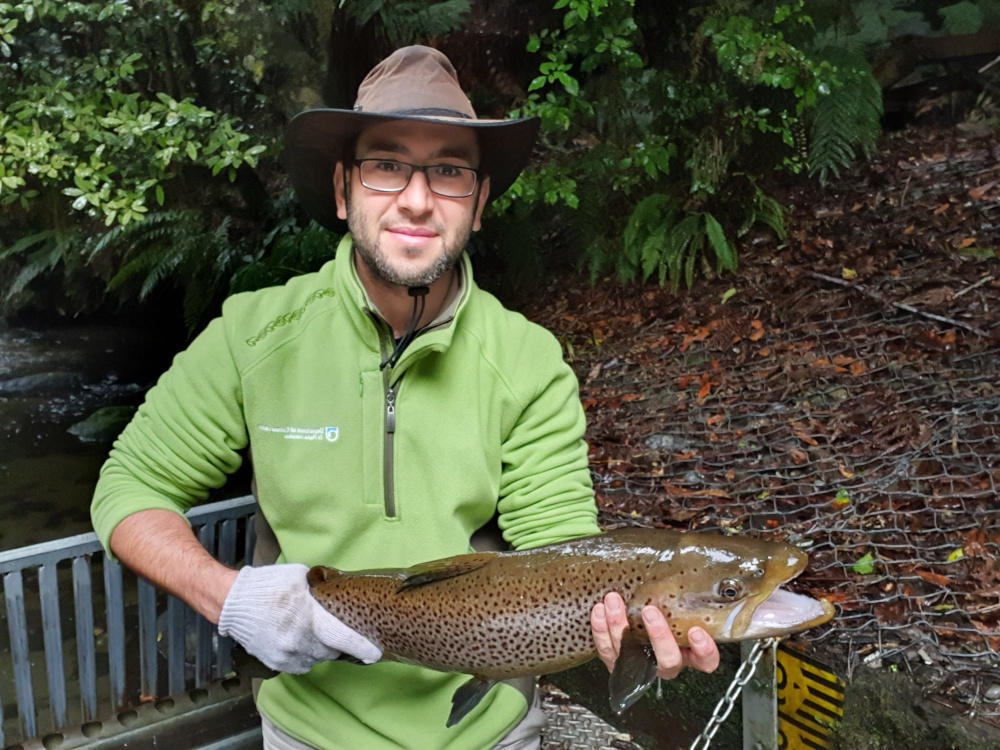 The Taupo Fishery has a very strict annual monitoring program for rainbow and brown trout populations using a wide range of tools: one of the most important and classic monitoring tools are definitely stationary fish traps, regularily checked by rangers.
Historically, there have been a number of traps spread across the different tributaries of Lake Taupo but currently our efforts are focused on two traps, the Waihukahuka stream trap, active since 1963, and the Waipa stream trap, active since 1998. Both streams are relatively stable and sheltered and they both host excellent run of rainbow and brown trout. However, while the Waihukahuka stream trap, at the Tongariro National Trout Centre, run all year round and it has also an educational purpose, the Waipa stream trap run between May and November, collecting data mainly during the spawning season, between May and November, providing a more reliable and accurate source of data that each year is compared to the entire dataset.
We collect data on species, sex and number of fish heading upstream and downstream, we fin-clip each fish and check for previous fin clips, in order to assess the spawning season for each fish reporting a clip that has already run the stream in the past. Everything is then coupled and correlated to abiotic parameters, such as rainfall, air and water temperature.

Additional information and monthly reports about the Waipa fish trap can be found at this link. 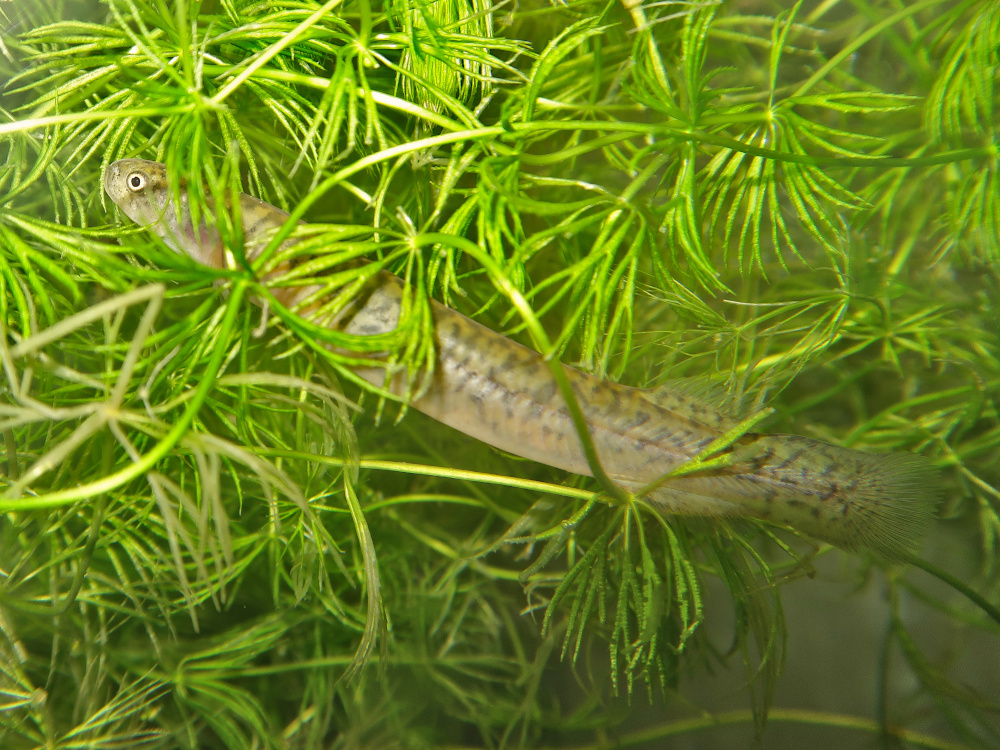 The identification of native and non-native species is exceptionally important in New Zealand, where a limited number of pest-species is present. We are working hard on a project focused on identifying which pest-species are present in a number of lakes of the Waikato region. Nets, traps, and the new environmental DNA kits and analysis will support our surveys, which soon will be converted on an annual monitoring programme.
On a side project, I am also working on a new atlas for freshwater native and non-native species, with the goal of collecting as many pictures as possible in order to use it for educational purposes. Soon, will start also a larger and more complex atlas that will include also macroinvertrebrate species. 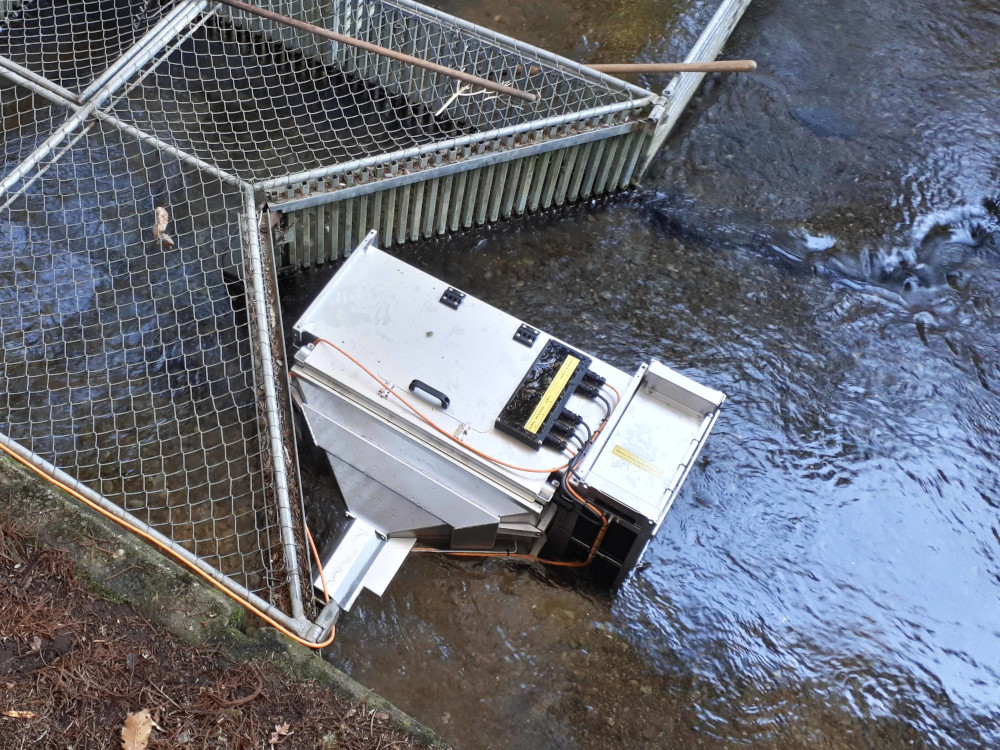 The VAKI Riverwatcher fish counter is definitely one of the most advanced pieces of technology I am responsible for. The VAKI is an automatic fish scanner to be set on field, across a stream or any restricted passages, natural or artificial, where fish swim through. Coming from Iceland and partially funded by Genesis, our VAKI Riverwatcher is currently the second automatic fish scanner in the southern hemisphere.
The VAKI uses a series of 96 infrared beams to count and measure each fish height during its passage, from which, at the second stage, the length of fish is calculated using a specific pre-set equation. Compared to the standard fish traps historically used in fish monitoring, the VAKI works 24/7, can be remotely-controlled if provided with internet access, it does not require a high level of maintenance, and it is totally inert, i.e., it does record each fish passages but does not interact with any fish. On the other side, the identification of sex, and sometimes species, can only be obtained from pictures and videos, and length and weight can only be estimated. However, with proper biometric measurements and specific equations, a decently high level of accuracy can be achieved.
Set at the Tongariro National Trout Centre, the VAKI Riverwatcher has now been through the first uninterrupted monitoring. 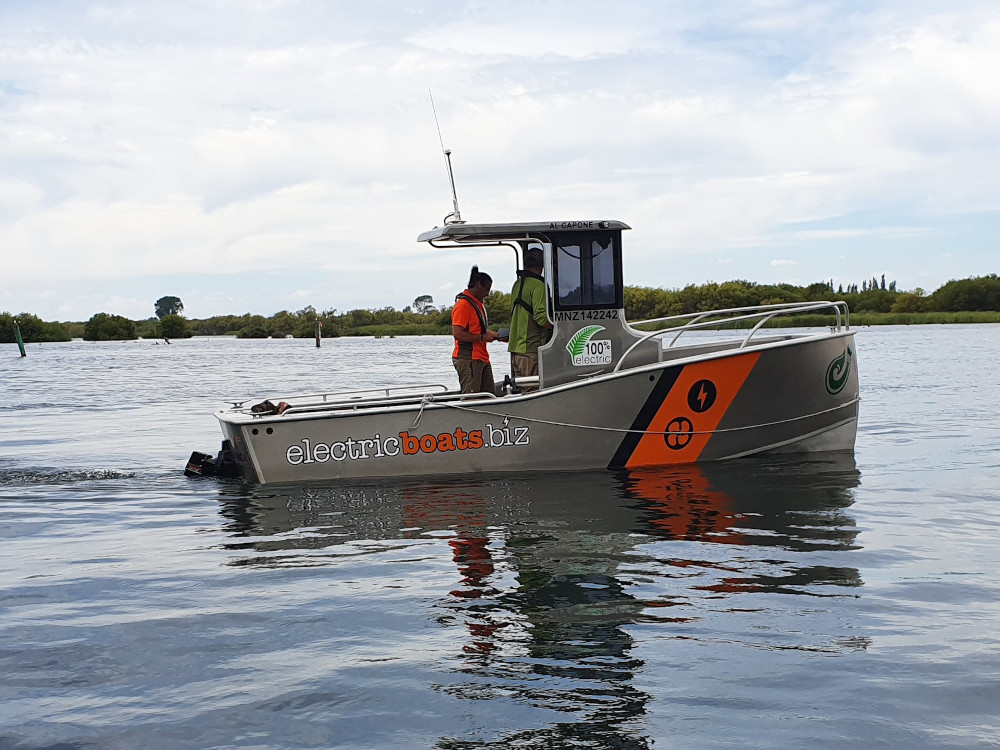 The Taupo Fishery owns three vessels and for a short period of time our fleet was extended with ‘Al Capone’, an e-boat working on a technology that the team has become a spokesperson for.
I had the privilege to be nominated team leader in the trial process of this electric boat, and being among the first to try the great potentials it is able to offer. Our team was chosen because of the strong experience in boat operations and the wide range of use it could potentially be used for. 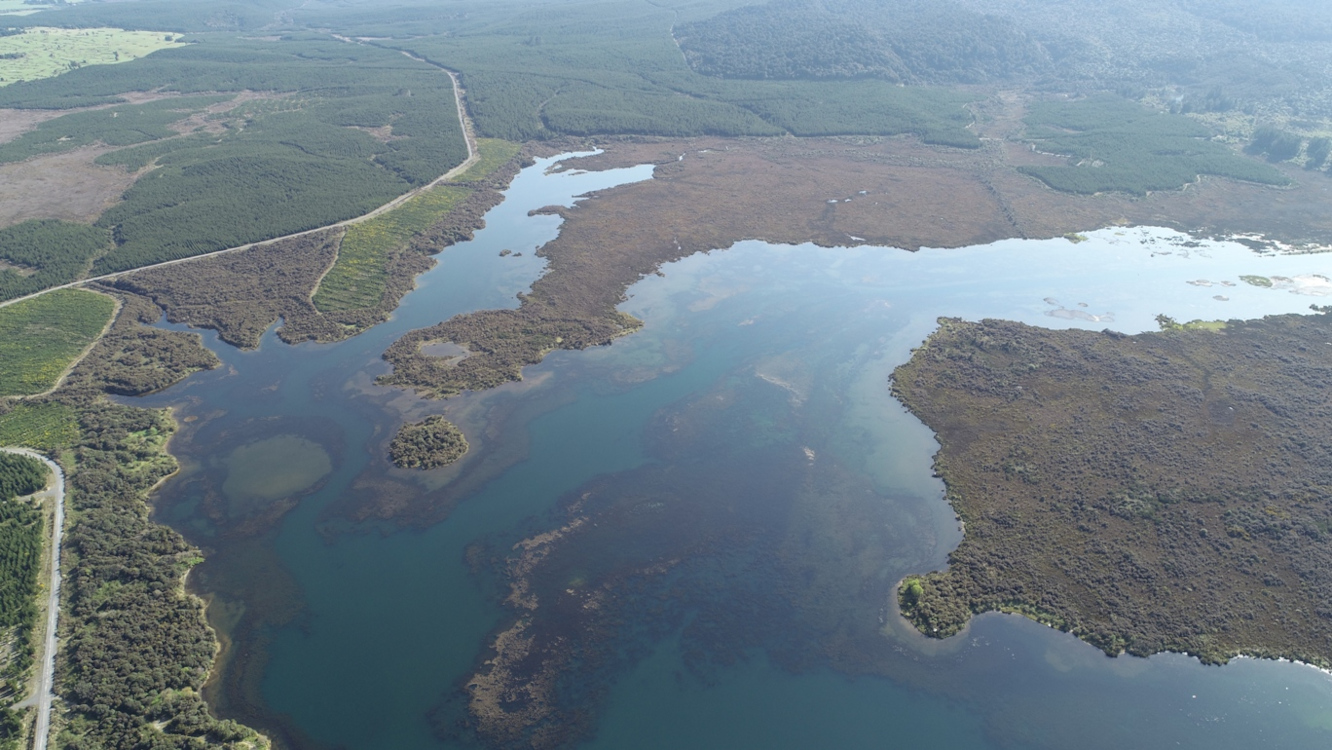 In our team, the drone technology supports a wide range of operations, or part of them, in particular at the early stage of operations’ designing and planning. From fish migration monitoring to habitat mapping, from pre-operation hazard assessments to compliance operations, from monitoring anglers’ tracks to alternative tracks’ planning, and much more, the use of the drone had a decisive role. 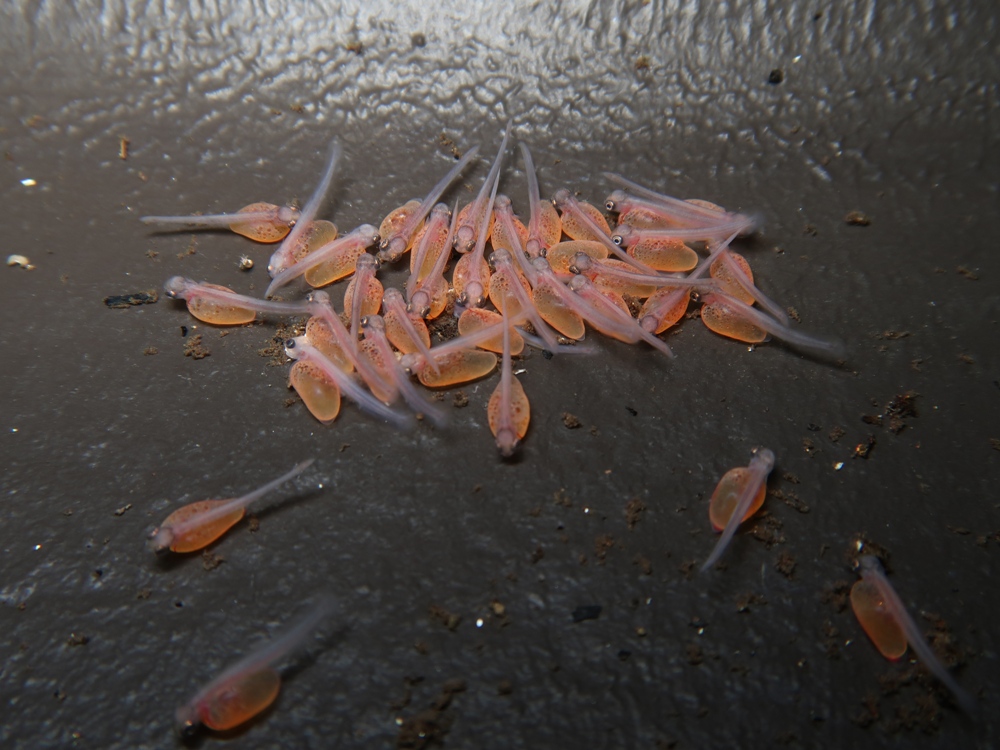 The only pest-fish we really care? Rainbow trout, of course. Fly fishing here is recreation, tradition, culture, for some people it goes even much further than that.
The Taupo Fishery supports the Tongariro National Trout Centre managing the hatchery and selecting some of the best rainbow trout from the Waihukahuka stream fish trap. Every year, several thousands of eggs hatch successfully, providing an excellent pool that is going to feed the kids’ fish pond, providing young (and very very young) kids with an exciting fishing experience that will introduce them to the fly fishing world. Additionally, trout production is nationwide and it easily supports other facilities, supplying large numbers of trout across all the North Island.

Additional information on the processes can be found in the videos at the bottom of the page. 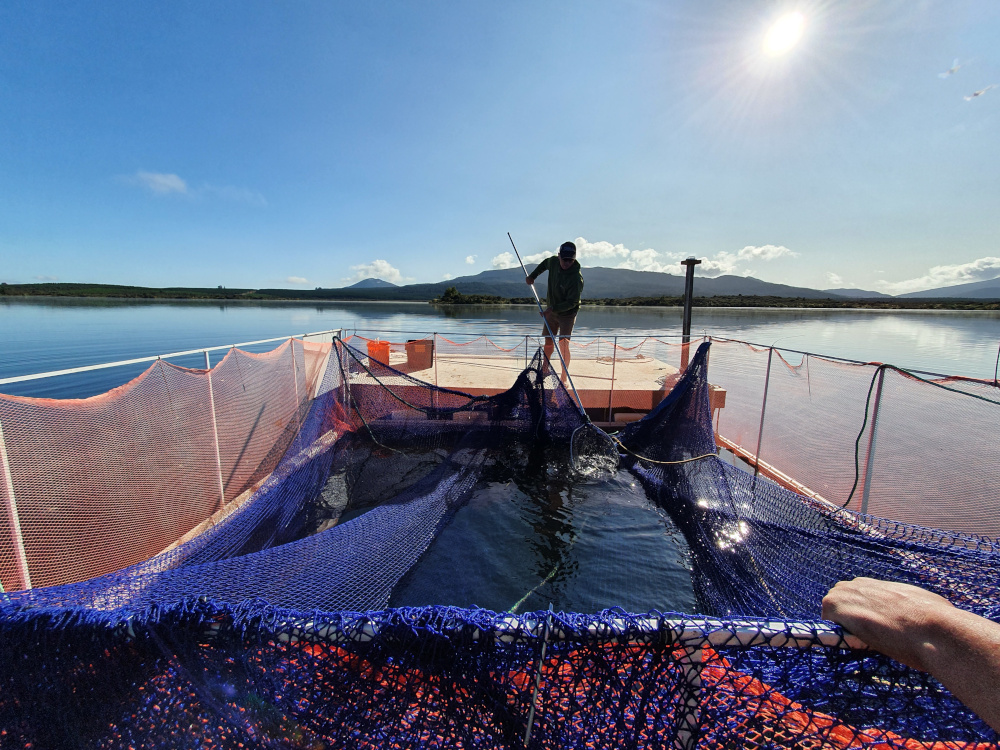 Close to Lake Taupo, also Lake Otamangakau is a scenic fishing location providing with some of the biggest trout in the region. On the other side, Lake Otamangakau supports a completely different ecological scenario, experiencing a higher level of stress compared to Lake Taupo because of the smaller size, the shallower water, the temperature and oxygen input.
Aim of this project is to assess and monitor the mortality rate post-catch&release in rainbow and brown trout, associated with oxygen and temperature data monitoring in the lake. This will provide key information for developing a strong and reliable management plan for the local fishery, changing or shaping differently the catch&relese practice.
To date we have already run a survey season and we aim to repeat the survey in order to collect additional data, and provide an excellent management tool aiming to get the best from the compromise between ecological and recreational value of Lake Otamangakau.