After a quick explanation about my research, especially when I talk about hundreds or thousands of invertebrates among seaweeds, people usually look at me with that typical face like wondering “What is he talking about? Where does he see all these organisms?“.

Unfortunately, our mind (scientific and not) has always been pretty restricted to allow us to give importance to what is invisible, small… (I remind the “conquest of the invisible” by Pasteur) neglecting a huge amount of species, interactions, functions, biological processes, etc… in a single word… “information“.

It seems to be hard accepting the idea that a little piece of seaweed can host a huge amount of species. That is why in this short clip I try to visually demonstrate what happen when we wash a little piece of seaweed collected from a rocky shore.
The seaweed is a Cystophora scalaris, one of the species I am working most with, and it is a very common canopy-forming seaweed in the rocky shores of New Zealand (Agardh used to relate it to Cystopseira sp. and Sargassum sp. from Mediterranean Sea because of their common role as facilitators in coastal habitats).

The majority of little dots at the bottom of the box are gastropods… but there are still hundreds of invertebrates pretty invisible to the naked eye in a box like this, like amphipods and copepods. The pictures show a clearer view of the epifauna more accurately sieved.

The difference in the amount of invertebrates is pretty clear. Even if I manually attached the epiphyte, Jania is a natural epiphyte of Cystophora, so what is experimentally happening here is just the emulation of a natural condition. But there is something more…
After deattaching Jania from Cystophora, I can rinse the epiphyte more accurately…

Obviously this quick clip does not want to have any scientific relevance and it is mean to give a very rough idea of what happen when an epiphyte increases the complexity of a seaweed structure and architecture with full advantage for the associated epifaunal assemblage.
Several are the factors here not included: the different size of the seaweed, the rest of smaller and “invisible” invertebrates for naked eye, the accuracy of the washing, etc.
Anyway, a more true view of the invertebrates can be offered by the next pictures, after an accurate sieving.

The epifauna I am considering has usually a size range between 250 μm and 2 mm and the majority of these are amphipods, copepods and gastropods.
In my PhD I am focus on the whole community of invertebrates. Nonetheless my primary focus are gastropods since they can be considered very reppresentative of the epifauna community for my purposes:
– they are slow-moving invertebrates compared with amphipods, copepods or crabs, so they can be collected easly without any virtual lack of information;
– they are relatively easy to identify, at least with a categorization based on morpho-species;
– they reppresent a very high proportion of the community, statistically strong, and a very diverse category of invertebrates: in my studies, gastropods reppresent more and less the 60-70% of the whole biodiversity. 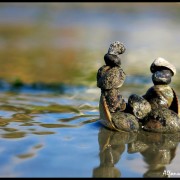 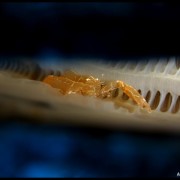